And Just Like That... we've got our first teaser.

The highly anticipated Sex And The City reboot, titled And Just Like That is set to land on HBO Max in the coming months, according to a new trailer the channel just dropped. Highlighting the slate of content headed to the service, HBO Max showcased some original movies and series set to arrive this year and well, you can be sure there’s one thing we zoned in on in particular.

Showing us our first And Just Like That teaser, fans will feel seriously nostalgic when they hear the voice of Carrie Bradshaw (Sarah Jessica Parker) playing over a clip of her kissing Mr Big (Chris Noth) in the kitchen of their apartment; like nothing has changed.

Now, anyone who has been following the And Just Like That updates will know that sadly, a lot has changed. With Kim Cattrall not reprising her role as the iconic Samantha Jones for the reboot.

Instead, And Just Like That will focus on the three other leads, Carrie Bradshaw (Sarah Jessica Parker), Charlotte York (Kristin Davis) and Miranda Hobbes (Cynthia Nixon) as they navigate love and friendship in their 50s.

Apparently, the show wants to give a real look at how things do unfortunately and positively change over time for everyone, including our favourite Manhattan girls.

With sneak peeks at what could be set to go down coming out of the woodwork, it looks like a major character is set to be killed off in the first episode, if this TikTok video is anything to go by. 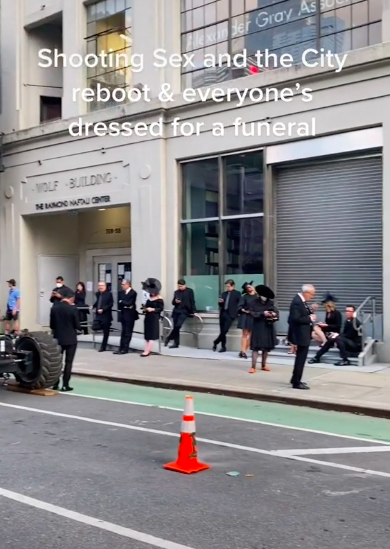 This video comes after a source close to the show teased that there was going to be a “big death” and now, the rumour mill is rife trying to think of who it could be.

Obviously, the first speculation is that it’ll be Kim Cattrall’s character Samantha Jones since she’s not returning for the reboot, while other names that have been thrown into the mix by curious fans are Steve Brady (Miranda Hobbes’ husband played by David Eigenberg) and Magda (Miranda’s housekeeper played by Lynn Cohen).

Poor Miranda is getting done here.

Will this major death – if it happens – take us all by surprise? Bring on the new series is all we can say. An official release date hasn’t been revealed yet, but once we know, you’ll know.