Love Island’s Toby Is Currently Living It Up In Dublin

Did you bump into him?

Love Island’s Toby Aromolaran is in Ireland’s capital atm, and when we’re saying he’s having the time of his life.

Celebrating his collab with boohooMAN, Toby was joined by his fellow islander Matthew MacNabb, enjoying a pint of Guinness and showing him around some of the city’s most inconic sights, including Temple bar, all before a glam meal in celebration of his collab in Dublin’s city centre. 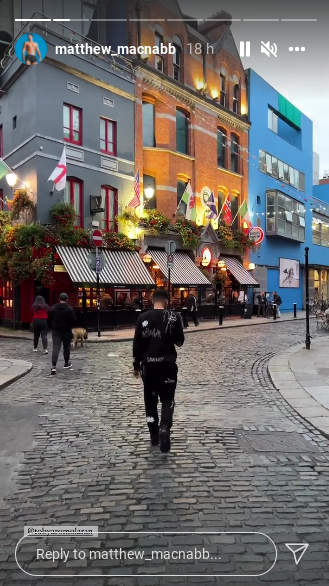 Over the next few month’s we’re set to see a lot more of Toby as he’ll steps into the shoes of brand partner with boohoo.

Of course, this isn’t Toby’ first time on the emerald isle however, as his mother hails from Mayo, he also opened up about the special place Ireland has in his heart, being the location of many happy childhood memories.

Chatting candidly to Ray D’Arcy on RTE Radio along with his mum Victoria, Toby recalled: “When I was a child, summer holidays come up, and my mum would just, like, throw me to Ireland. Like, ‘Go there!’ and I’d be like, ‘Ok, cool’”

“They went out from morning to night and they only came back when they were either dirty or hungry so that was it” added Victoria.

“That was the good old days, I was chasing frogs around in the fields, running after cows – it was weird!”

“I think you fell into a stream at one stage as well” said his mam.

Toby heads home to England today following a two-night visit to Ireland, where he will reunite with Love Island girlfriend, Chloe.