People are laying INTO Kanye West after his bizarre appearance on Saturday Night Live this weekend.

Kanye wore a Make America Great Again hat throughout his performance, and ‘treated’ the audience to a long pro-Trump speech after the cameras stopped rolling.

He later posted a photo of himself in said MAGA hat, saying it represents “good and America becoming whole again”:

this represents good and America becoming whole again.  We will no longer outsource to other countries. We build factories here in America and create jobs.  We will provide jobs for all who are free from prisons as we abolish the 13th amendment. Message sent with love

It seems like this is the straw that broke the camel’s back, because everyone has been queuing up to slate him over this particular outburst.

Singer Lana Del Rey (who Kanye hired to perform at his and Kim Kardashian’s pre-wedding party in Versailles) said he is in need of an ‘intervention’ and accused him of relating to Trump’s ‘delusions of grandeur and extreme issues with narcissism’. Go IN, Lana. 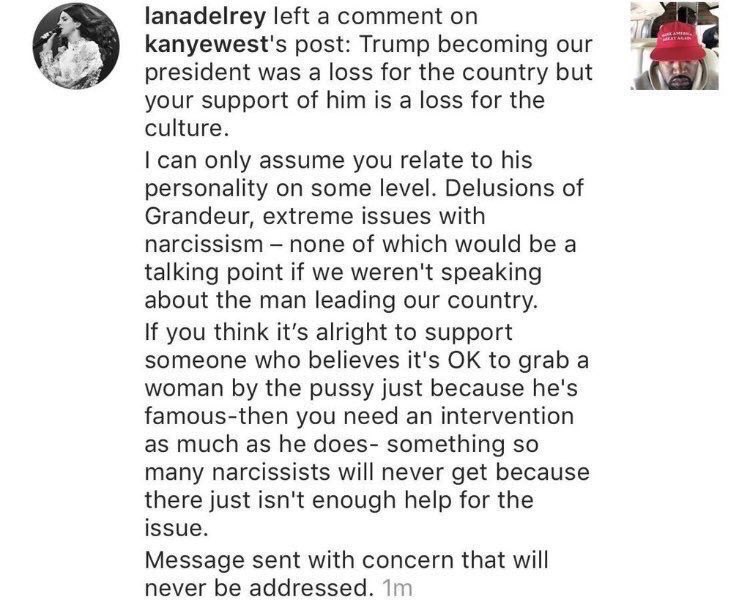 Even bloody CAPTAIN AMERICA has weighed in:

Red lipstick and straight hair ? is it a thing on mehhh?!

Love Island’s Ellie Brown has spoken out about her breakup with Charlie Brake, which he rather unceremoniously announced last week.

The pair had a pretty rocky relationship even in the villa, and were rumoured to have broken up and gotten back together a few times before officially ending things.

Ellie thanked her followers for sending her lots of love over the last few days, but asked people to stop linking her to articles about the split:

I beg you to please stop coming to me with articles that claim I brought this on myself… By no means am I saying I was the perfect girlfriend but I adored Charlie from the bottom of my heart and he knows that. I know everybody is waiting for a comment from me on this whole situation but I really just don’t even know what to say…

During the week, there were reports that the breakup came after Charlie cheated on Ellie, but this hasn’t been confirmed or denied by either of them. Love hurts.

Gwyneth Paltrow announced her marriage to Brad Falchuk with a simple photo of their wedding bands. Aww.

The couple met in 2014 on the set on the set of the show Glee – Brad created the show alongside frequent collaborator Ryan Murphy, and Gwyneth was a guest star. They announced their engagement in January of this year, and sealed the deal in a private ceremony over the weekend.

It appears that RDJ turned up wearing a bucket hat. Classic RDJ.

Nothing beats a great night with an old friend. RDJ, I luv ya!

Gwyneth, of course, was previously married to Coldplay frontman Chris Martin, with whom she has two kids. They’re still extremely close (so much so that she says he’s like her ‘brother’ now, which… OK) but it’s unclear if he was at the ceremony.

We interrupt the regular #WilloughbyWatch content to bring you this #sponcon from Holly for Garnier undereye masks – which she is wearing the wrong way round (the slimmer end is supposed to face the corner of your eye). Her followers are absolutely DISGUSTED that she is promoting skincare, seemingly forgetting she’s been a Garnier ambassador for forever: “It’s such a shame that you have done this. Leave the shameful promotions to TOWIE or MIC.” Oh bore off, Margaret.